By Tracy Schumer on November 15, 2010 in History with no comments

There is perhaps no other major city in the world that has as healthy a horse culture as London: mounted police force- check, public riding trails- check, fabulously impressive royal stables and palace horse guard- check and double check. For horse lovers in particular, a visit to London isn’t complete without touring the stables of the Household Cavalry located at Whitehall. The museum opened in 2007 and is well worth a tour to pick up some history and get an up close view of the impeccably turned out mounted guard. If you happen to time your visit with an official ceremony, you could see as many as 150 mounted cavalry on parade but even a dozen or so conducting their daily duties is quite an impressive sight.

The Irish Black, a type of warmblood, is the horse of choice for the Household Cavalry but other breeds are also incorporated. Shire and Clydesdale draft horses are used as “Drum Horses”, for example. During parades, these big guys carry two huge kettle drums with a rider/drummer mounted in between. Then there are the greys who traditionally horse the royal carriages but are also ridden by the State Trumpeters. In Europe, there are still a few countries who maintain ceremonial cavalry; France prefers chestnut colored warmbloods for their Republican Guard and Italy’s Royal Cavalry also uses chestnut horses. 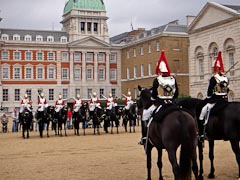 The English Royal family’s household guard dates back to 1660 but don’t let all that “tradition” fool you, these guys are highly trained military. When their not on duty serving the Queen on horseback, they can be found on active duty in the combat zones of the world driving armored vehicles. The daily changing of the guard at Whitehall is the best place to see this impressive cavalry up close, it’s open to the public and free. Entering the grounds from Whitehall, you can walk through the courtyard to the parade ground adjacent to St. James Park for the best view. The cavalry rides down daily from Buckingham Palace and enters the parade ground via Horse Guard Road to meet their replacements who have come out from the stables at Whitehall. They stand facing each other for inspection for several minutes which gives ample time for picture taking. 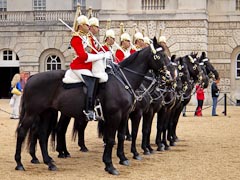 Once the inspection is over they change positions and the fresh guard heads back to the palace. One thing you’ll notice is the different colors of the regalia the cavalry are adorned in- red tassels and black blankets belong to the Blues and Royals Regiment while the the Queen’s Life Guard wears white. All of the cavalry wear very tall Jackboots made of gleaming black patent leather that are absolutely impossible to walk in. Originally, these boots would have been lined in chain-mail to protect the rider’s legs in battle, hence the term Jacked.