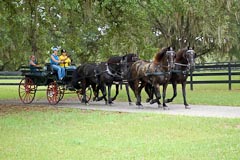 In the year since we published Lady Weirsdale, there have been a number of changes made at Gloria Austin’s Florida Carriage Museum and Resort. She has recently sold her operation to her ex-husband, Tom Golisano. The facility will now be renamed; The Grand Oaks.

The good news is that the fabulous carriage museum will stay intact along with the carriage driving school and there will be an expanded event schedule. Mr. Golisano is planning several improvements to the property and facilities.

Gloria plans to stay involved with the education programs and you may still see her driving from time to time. At this writing, Kacy Tipton-Fashik has stayed on as equine manager.

Kacy has developed into an excellent driver, instructor and was honored to be chosen as Gloria’s second; Kacy was the whip for the coaching demonstration at the 2011 Live Oak International. She took the box seat and drove the elegant Healey Park Drag put to a team of four Friesian horses. Well done Kacy!

Gloria herself enjoyed a springtime excursion to the UK to visit with old friends from her coaching days- among them; coachman John Parker and Gloria’s former teacher and carriage collection advisor David Saunders.

Gloria Austin’s contribution to carriage driving is without equal. We wish her all the best in her future endeavors.

Road to the Horse 2012 Goes Global with International Teams 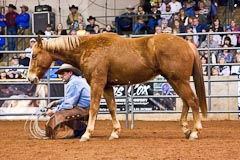 With the success of the 2011 Road to the Horse Legends event, only one question remains; “How are you going to top this?” Event producer Tootie Bland’s answer? Go global! Find the world’s best clinicians, place them in an innovative international team format and let them go toe to toe for the World Championship of Colt Starting at the 2012 Road to the Horse 9-11 March, 2012, in Murfreesboro, Tennessee, USA.

“Going global means new horsemen, new styles of horsemanship and an exciting challenge to see who’s the best in the world”, says Bland. “Our own national pride is on the line so we will find out in Murfreesboro who is the best. There is going to be more horsemanship in one arena than ever before. I can’t wait for this one!”

Traditionally, three to four clinicians have been matched up for this prestigious competition. The event format gives competitors just a few short hours over two days to train an untouched young horse. The colts must accept a rider in front of a live audience and the attentive eyes of the judges and press corp. While training has been limited to two days in the past, the 2012 event will feature round pen sessions on all three days.

“We’re doubling down! Never before [in this event] have six clinicians shared the arena floor and never before have we paired competitors up in a team format. Road to the Horse is known for its twists and turns and we’ll definitely have some new challenges for our competitors.”

For an annual fee of only $39.95, Nation members receive privileges such as advance ticket purchase opportunities, a special prime seating section, merchandise and apparel discounts, early admission to the event and an interactive Road to the Horse Nation website.

Horsemen Jonathan Field and Glenn Stewart have been chosen to represent Canada at the 2012 Road to the Horse competition, March 9-11 in Murfreesboro, Tennessee. Both Field and Stewart hail from British Columbia, Canada. “This is so exciting to be able to represent Canada in Road to the Horse 2012!” reports Field. “I was so happy to hear that my teammate will be my good friend Glenn Stewart. I am looking forward to meeting my colt and doing the best I can for Canada!”

Stewart mirrors the same thoughts. “Road to the Horse 2012 Team Canada! I can’t think of a more exciting event to participate in, nor can I think of anyone besides Jonathan Field who I’d rather be with to represent Canada!”

Event owner and producer Tootie Bland is equally excited about this new approach to the competition. “We have invited Australia and Canada to see if they can match the talent in the United States. National Pride is on the line. There is going to be more horsemanship in one arena than ever before. I can’t wait for this one!”.