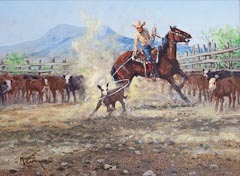 I’ve heard it said that a cowboy is born and not made. I’m not sure what that means. I’ve seen kids grow up around good hands and learn to become good hands themselves. I have also seen youngins that were flesh and blood of some of the best and none of it rubbed off. I’ve always enjoyed watching a young man grow up in a situation where he was surrounded by good cowboys and have a place to put his cowboys skills to use.

Chet Dove was one of these young men who was raised around the serious professionals and he didn’t mind the pressure. He grew up being more cow than human. He would unload from his dad’s pick-up after a long ride in the pasture while checking waters and run to the first salt block, get down on his his hands and knees and start licking the salt block like a cow.

Chet was around men who liked to ride all day and then come home in the evening and ride and rope some more. One evening during a relaxed session in the roping arena, Chet arrived after a fretful day at school and he was anxious to get to roping and didn’t realize that old Snake, his roping horse, was not as interested in the roping as Chet was. Chet failed to warm him up properly, backed him into the heading box, and called for his steer more excited about the chase than proper preliminaries.

About half way down the arena old Snake broke in two and was doing a good job of making Chet concentrate on his riding skills, but Snake was too much for Chet and he hung his foot through the stirrup as he was being bucked off. For several jumps Chet was hung by his boot upside down and looked like he was playing crack the whip with old Snake. Everybody exploded into action, running to his dilemma.

All of us were working on a plan of what we were going to do when we got within range of doing something. Some of us were going for our knives, some had ropes down while others were trying to get to their guns. Luckily, just before we all got there, Chet’s boot came off and he fell to the ground safe and sound as ever. Just as we all got there Chet jumped up and said, “Dad! Dad! I’d a rode him if my boot hadn’t come off!”