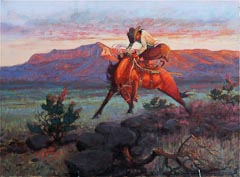 Cowboys and Sailors have a lot in common. Sometimes when a storm is brewing, about all you can do is batten down the hatches and try to ride it out. Cool, breezy mornings make young horses fresh and frisky and if the cowboy is looking for a little excitement, well, it won’t be hard to talk Mr. Storm into obliging him.

This reminds me of a time, a considerable number of years ago, in the top of the Delaware Mountains when the sky was exceptionally red and the cowboys were all fresh and looking for a little excitement. Except for a couple of the older hands, who were trying to get through the morning without any more delays or discomforts than necessary.

We were leaving camp and everyone was mounted and moving, but you could feel the tension in the air. There was a stiff cold breeze hitting us in the face and the horses were walking on eggshells. Everything they stepped on made them jump. It doesn’t take much of this before somebody has to test the air and see just how frisky they really are.

I was riding a reject off the racetrack that was five years old and this was our maiden voyage. He was bouncing around looking for the starting gates and I was loosing patience with his lack of concern for our early morning project. No one on this crew was interested in this horse’s childhood deficiencies or his thumb sucking routines. So I decided to see if I could enlighten him some as to the importance of paying attention to me and our project at hand.

Our mutual differences erupted into a picture of a small boat on a very rough, angry ocean. He was mad and certain that he could get rid of me and my annoying instruments by throwing a first class bucking fit. Well, I had my mad on too and I was pretty sure that I could show him a thing or two that they didn’t know at the racetrack.

Needless to say we sure were stirring up the landscape and I was getting more confident with every jump but I could tell this horse wasn’t under-confident about his methods either as he was running through his bag of tricks. I was sure making a ride of it and feeling pretty good about my sailing skills, when the race horse found a new vantage point.

He had topped a rise in the landscape and found the other side had a decline that really increased his momentum. His jumps weren’t nearly as high but they were several times longer. By this time I felt I had gone from sailer to surfer! One who was six feet off his board and loosing touch fast. The terrain was looking less like a racetrack all the time, plenty of large thorny bushes and Mr. Storm was having to make some decisions about dodging them but checking his speed in order to negotiate around them was something he hadn’t considered.

I could tell that it was going to be necessary for him to decide a direction change in order to miss the next upcoming obstacle which was a large agarita bush. It was big enough to cause him to make a big move one way or the other as I was pretty sure he wouldn’t hit it head on. I was concentrating on the bush so hard that I didn’t make the move the horse had decided on and ended up torpedoed all the way through the agarita bush.

It is a good thing I had a bunch of warm clothes on, as the limbs on the agarita were plenty stiff and I could have lost some precious hide. As fast as I was going through that bush, I managed to come out on the opposite side in wonderful shape and I wasn’t missing anything other than some air that I had spent in the little exercise. I jumped up real quick to let everyone know that I was still game and ready for more action. I was surprised to see several other ships that had become hard to ride in the rough seas. It certainly was a stormy morning and I was so busy watching all the other riders that I didn’t see where my ride had gone but I was pretty sure he was off to tell all the world how these cowboys couldn’t ride any better than those jockeys with their little saddles.

Everybody was doing a better job of staying aboard than I did but I did get up in time to see a mighty fine ride made by one of my sailing buddies. He did manage to loose his hat. His horse was a small black horse that had some quick, catchy little moves. One was a suck-back at the edge of a deep gully very much like my horse had made at the agarita bush but this sailor was watching the gully and made certain that he made the suck-back but his hat went sailing to the bottom of the gully.

After the storm was over, It took us a while to gather up all our scattered articles but nothing lost and all in good shape. Everybody had knocked the chill off and we gathered forces and headed off to restart the days chores. I rode with both hands on the steering wheel the rest of the day and never missed an opportunity to impress Stormy with the pleasure of working cattle in high rough mountains. He was a fine animal with lots of energy and willingness but it was a good thing we had a big day. He needed all the country we had that day. I sure wanted to impress him with how big and rough the racetracks were here. I went on with Stormy and he made a good cowhorse and I kept him for a long time. He never again tried real hard to buck and was always ready to go to work, I would ride him for any job that came up and he could handle them all.