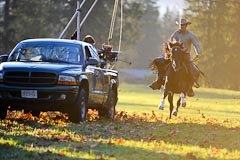 We receive dozens of press releases and news feeds every day here at HMH. Most cover mundane horse industry news but a few are really interesting. Occasionally, something special comes in over the wire. The story below with accompanying video is well worth a look.

It’s about the latest ad campaign for the new BlackBerry Bold smart phone, a young Canadian horse trainer who suddenly found himself in the spotlight and how this unlikely combination produced something wonderful.

Read the story, watch the video, enjoy your Sunday coffee and have a great day from all of us here at High Minded Horseman.

Sometimes you find yourself in the right place at the right time. That’s exactly what happened when Canadian horseman Jonathan Field of Abbotsford, British Columbia, was showing off his new smart phone to a client like a kid with a shiny new toy.

“It was a real fluke,” says Jonathan. “I had a new BlackBerry smart phone and was bragging about how cool it was to a lady whose horse I was training. It turned out that she’s an executive with Research In Motion (RIM), the company that owns BlackBerry. Her comment was, ‘Hey! You’d be perfect for the BlackBerry, ‘Do What You Love’ campaign!’” 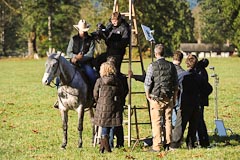 Next thing he knew, the horse trainer, clinician and Parelli disciple found himself in the midst of a full-blown television production. When asked about the filming, Jonathan’s enthusiasm was evident. “It was amazing! They had a 25-person film crew, 40’ revolving camera cranes and trucks that bounced alongside me as I galloped Hal.”

One would think that being a first time star in an international add campaign had to produce some anxiety for Fields. “I arrived at the catering truck that first morning,” remembers Jonathan, “and immediately the focus was on me. Everyone was saying, ‘Hey, there’s Jonathan!’  All of a sudden I realized I was that guy! I was a little nervous at first, but once I was on my horse, it became a lot easier.”

“The director suggested some scenic spots and asked me to just play with my horses. They started the cameras rolling and let the story evolve. To get to where the director wanted a creek shot, I rode Hal 150 yards up a rocky creek as he scrambled, slipped and slid on boulders. The film crew and I waited on the bank for half an hour so Hal could rest before the cameras shot us walking a mere 20’ across the creek.” 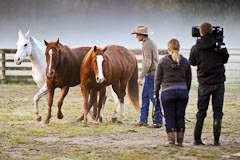 Finding a schedule that suited all parties was a challenge. "I had just finished teaching a clinic in horrible storms — rain blowing sideways, thunder, lightning, it was miserable conditions. The two days of filming were right after that so I had my fingers crossed but those were undoubtedly the best two days in November we’ve ever had!

The first morning the director was excited because there was a spectacular layer of mist that hung over the background of the Virtue Studio Ranch in Mission, British Columbia that belongs to my friend Danny Virtue. Then it cleared off to a beautiful May-like day."

This TV commercial has an impact beyond one horseman using a BlackBerry Bold smart phone. “I was very excited and honored, of course,” states Jonathan, “but the importance of this commercial goes beyond me and BlackBerry. The presence of horses and the horse/human relationship in a mainstream commercial is remarkable.”

“This benefits the entire horse industry — perhaps the inclusion of horses in commercials will now happen more often. RIM understood how horses capture people’s minds and dreams and recognized the opportunity for the BlackBerry/horse connection. Let’s hope other companies follow.”

So what did Jonathan think of the final commercial? “I was surprised that the majority of it was about the horses and about me communicating with these animals. It was only at the end that they brought in information about the BlackBerry Bold smart phone. It was amazing.”