A companion article to this one can be found in our Features department TCAA 2010 “A Saddle Story”. 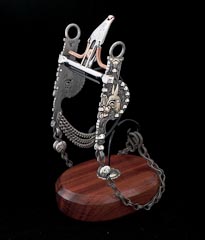 Since 1998, the last weekend in September has been setting the world of western craftsmanship on fire; igniting the imaginations of collectors, cowboys and the public at large. Hosted annually by the National Cowboy and Western Heritage Museum in Oklahoma City, the 2010 Traditional Cowboy Arts Association Exhibition & Sale will demonstrate once again that this level of craftsmanship is also fine art. “From what I see this could be one of our most exciting shows”, says TCAA president and Alberta, Canada, silversmith Scott Hardy, “We have 53 pieces in all this year, everything from elegant and simple to off the grid western craftsmanship.”

The TCAA is a not for profit organization dedicated to preserving the traditional arts of fine western craftsmanship. An educational coop, the group finances its educational programs, workshops and scholarship awards through the annual sale. Each year the 21 active members create astounding examples in the disciplines of rawhide braiding, bit & spur making, saddle making and silversmithing. Every year is celebrated with a theme chosen from one of these four disciplines; 2010 will feature saddle making. 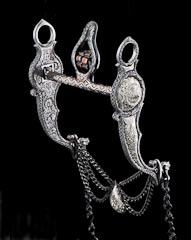 “I don’t know what was in the water”, Scott Hardy continued, “everyone seemed to go above and beyond. It will also be one of the most diverse shows we’ve ever had. There are seven saddles that will be offered, each one drastically different than the other, from Rick Bean’s ‘his and hers’, to Chuck Stormes’ Mexican Charro saddle. Bit & spur makers have everything from off the grid bridle bits to unbelievable snaffles. The rawhide braiders never let us down, Leland Hensley created a quirt that features a miniature reins and romal for a wrist strap. Nate Wald gives us a lesson in hobbles with four different sets. Then there is the elegance the Argentineans bring to the program.”

One of the more unusual items this year was one created by Scott Hardy himself, “I created a set of twelve sterling silver napkin rings with over four hundred hours in this project. The rings are hand rolled, formed and fully filigreed; all set in a Makassar Ebony presentation box mounted with matching sterling silver filigreed hardware.”

I had to ask Scott what he thought napkin rings had in common with cowboy culture and it turned out that culture was exactly what he had in mind, “A lot of great ranches in North America were started by people of European decent. They loved the ruggedness of the west but also wanted to incorporate some of the refinement of Europe. This was the history of the King Ranch of Texas, the family decorated their dining room with fine silver from Tiffanies of New York. This historical perspective was the impetus for the napkin rings.” 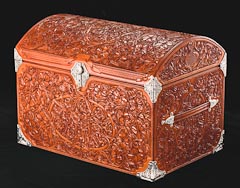 One of the hallmarks of the Traditional Cowboy Arts Association is the member’s creative collaborative work. Each year’s show features pieces made by two or more members working together; each contributing their own specialty to the finished work. A spectacular example this year was made by saddle maker John Willemsma of Guthrie, Oklahoma, and silversmith Scott Hardy, “Last year at the TCAA show I did a talk on craftsmanship and in that talk I mentioned an antique trunk I had seen in the 1980s. John was sitting in the audience and soon after the lecture he approached me about working with him on a coach trunk.”

“Of course I said, ‘you bet lets have some fun!’ John and I spoke often about the trunk kicking ideas around when we finally settled on what silver pieces he needed: twelve corners, three hinges, four handle pieces and a front hasp. My next question to John was how do you want to do this? I can be conservative in my approach to the silver or I can kick the doors down. Without hesitation John said, ‘kick them down!’, so I did.” 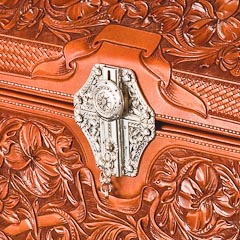 “All of the silver is extra heavy #14 gauge. I went looking for tubing for hinges and there wasn’t any available that I felt was thick enough so I formed my own; thus went the whole project. Every piece of silver is fully filigreed and hand engraved. I started working on the trunk in March and finished the first week of July. The main hinge on the trunk, from initial design to final engraving took close to three weeks. There was endless layout, design and head scratching but what a glorious project.”

“As for John I’m so proud of him I could burst! What an incredible craftsman, he applied to the TCAA five times before getting in on his sixth try. Every application piece got better, stronger and every suggestion given to him he followed up on and now we have created a monster. He can’t seem to get enough and the trunk is a perfect example. The trunk is beautiful to look at but to have both the artistic and craftsmanship abilities to design and create this is mind boggling. I would like to say congratulations to John Willemsma, it was my honor to collaborate with him.”

The TCAA sale night is an exciting evening as well as a unique opportunity for fine western gear collectors. All of the pieces offered are one of a kind original works and each will be marked with the TCAA logo- a brand that is only used on exhibition pieces. After the sale, the entire show remains on public display at the National Cowboy and Western Heritage Museum through January 2, 2011.

September 24-25, 2010 attend opening activities for an exhibition and sale showcasing the best of saddlemaking, bit and spur making, silversmithing and rawhide braiding from the members of the Traditional Cowboy Arts Association. Exhibition continues through January 2, 2011. Reservations requested for most opening weekend activities. Make your reservations online and also order an exhibition catalog or call (405) 478-2250, Ext. 219.