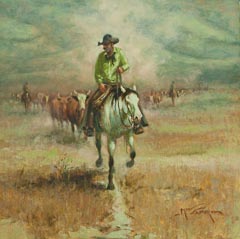 Takin’ the girls home in the fall after shipping time is the cowboy’s pride. These are the cows that have produced a paycheck by raising a calf and have managed to get their baby brought along through to shipping time. These are the cows who earn the respect of the cowboy and write his paycheck. They’ve withstood the forces of nature while making a living for themselves and their offspring. Those cows who accomplish this feat with the cowboy’s approval are returned to their respective pastures for another season of bovine grass harvesting and baby raising.

This is the main reason for the cowboy’s existence. Moving a herd of cows is always a test of cowboy skills and one that is not understood by all. Cattle have to be taught to drive. There is no finer example than the days of the great Texas cattle drives when fifteen to twenty men could take three or four thousand head of cattle to Kansas and other parts north in one season with the cattle gaining weight on the trip. The basic idea is for a cow to always be making a step in the direction of the destination and not to be wandering in different directions. The length of the cattle drive, the weather and terrain have to be contended with in order to complete a successful cow drive.

Cattle returning to their home are much easier to drive than cattle leaving their home. There are many considerations but basic fundamentals and methods start with a leader. It can be a man horseback or a gentle cow or steer in the lead. This gives the herd something to follow and a very strong reason to go somewhere. Then the point men always direct the herd behind the leaders. It’s legal for the cattle to eat and walk of course but never to deviate from the direction of the leader. Always one foot in front of the other in the direction of the destination.

Behind the leaders and point men come the herders and flankers; their purpose is the same. Last but certainly not the least are the drags. These men may eat more dirt but they are the individuals who set the pace because the herd can’t move any faster than the slowest cow. They keep the back end pushed up without causing any excess movement and causing the drags to become exhausted.

It’s very important for all herd members to have their respective calf if they have one and be allowed to have enough space to walk, graze and move in a consistent manner. The leader has to watch the whole herd in order to establish the speed he can travel. He always keeps in mind the slow ones in the back and is watching for individuals trying to move in excess speed or ones looking for an excuse to leave the herd.

The point men have the same responsibility along with the added responsibility of driving the forward portion of the herd. The herd is not driven from the rear but instead from the sides alone. All men on the sides of the herd are responsible to keep the speed regulated by applying pressure equally from each side. In other words the men on the sides of the herd should move up and down the herd in unison and directly across from each other. The distance they have from each other creates the pressure that makes the herd squirt through the gap and either speed up or slow down. No spaces in the herd are allowed and every cow moves at the same speed with her calf or herd buddy constantly observed by the point men and the flankers.

There’s no position on the crew that allows more room to relax than another. Every position requires a constant awareness of where all the cattle are at all times and each position has it’s own responsibility. The act of moving a herd for any reason or any distance should be handled in this manner and these principals also apply when penning cattle. Certainly the rules can be broken, for instance when moving cattle up mountains on narrow trails where there’s no room for the riders on the sides. In this case only the leaders and the drags are used and the herd is broken up into small groups and pushed up the mountain from the rear.

The brush country of south Texas, is cow heaven but some of the hardest country to work cattle in and the cowboy has to be on his toes constantly. He often has mere moments to turn a cow before she can get away back to the thick brush of south Texas. The brush hands are very strict about these rules and some of the most serious hands in the way they handle their cattle. Greenhorns don’t last long there unless they learn quick.

One example of this was a number of years ago when helicopters first arrived on the cow works scene and one of these helicopter cowboys was given a chance to prove his cowboy skills from the air. We were moving a very rank set of cows through a couple sections of thick brush. Their was a faint trail trough the brush and it was decided we would help the helicopter by a couple of us in the lead and a couple would watch the drags while the hand in the air would watch both sides and try to keep the cattle out of the brush.

Well the drive went well without a single wreck and we managed to get the cattle penned on the other side of the brushy sections. We were sitting on the closed gate telling each other how much we had helped the high flying puncher by not holding the cattle to a slow walk and had given the cattle plenty of room to go somewhere and we were pretty well convinced that he would never replace the real brush hands.

We were proud and never dreamed anyone could replace us when Jenny Bess spoke up. Jenny Bess was as respected a brush hand as any in south Texas, she knew how to work cattle in thick brush and she was as hard core as they came. She allowed that the helicopter would never replace the real brush hands because he always turned his tail to the cow.