By Jackson Wald on October 02, 2010 in Training with no comments 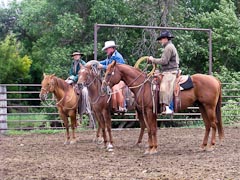 Labor Day weekend was especially fun this year for a few people; those that attended the Joe Wolter Ranch/Horsemanship clinic at the Wald Ranch. Hosted by Nate and TJ Wald, the clinic was a great learning experience as well as a fun get-together for fifteen friends. We started Friday with everybody meeting each other and talking a little about what they wanted to work on personally.

Some people brought mature broke horses and some brought colts barely started. Joe had something for everybody. The first day we didn’t work any cows, just all worked on getting our horses more responsive and tuned in to us while being as light with our hands as possible. That evening a few of us boys went out and roped some of the yearling heifers we had for the clinic… strictly for trial purposes of course.

Saturday we started out doing the same thing, warming up our horses and getting them softened up for the day. Joe lined us out with a short talk about what we were going to be doing that day and then he demonstrated this on a cow; just tracking and letting the horse understand the cow is all that matters right now. We all took turns hooking on to the critter and eventually started moving up and stopping them.

After working at that for awhile, we started letting our horses stop the cow and then turn with them and go the other way. This all eventually leads up to boxing and sorting a cow out of the bunch. Again that evening, some of the heifers got roped… just to make sure they had survived the day in good health.

Sunday was total cow work start to finish. We worked in teams, we worked individually and it was all a blast for everyone involved! One of the guys had a green horse that didn’t much care for the saddle on his back when he moved faster than a trot. Anytime he moved off in a lope the lope became weakhearted bucking so we all just got in a big round circle in the arena facing out. We all got our ropes down and started that little horse around the arena at a lope. As he ran by each one of us, he got a rope thrown in his direction to keep his energy up. Eventually he learned that he could lope with the saddle on quite comfortably!

Sunday ended our little clinic, it was a very informational three days that proved to be a blast at the same time. Everybody was good friends by the time we were done. All in all, I would recommend one of Joe Wolter’s clinics to anybody, at any level of experience!