By Tracy Schumer on March 28, 2011 in Competition with 2 comments 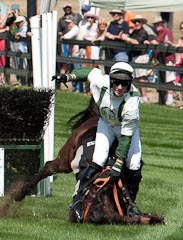 A recent survey of eventing riders found that none considered themselves overt ‘risk takers’, however, some did admit that they experience, “extreme fear and anxiety during competitions”. The survey was conducted by the University of South Australia and included riders aged 14-54 from beginner level to international competitors.

Most riders won’t admit it, but everyone experiences some level of heightened emotional anxiety at some point. Nervousness, anxiety and even outright fear are common occurrences for all types of horseman. If this is you, relax, you’re not alone and what you’re feeling is perfectly normal.

Clinician Bryan Neubert places a heavy emphasis on safety during his clinics. In particular, he works hard to keep his colt riders out of trouble. This applies not only when his students are in the saddle but also on the ground. He often talks about the negative effects of bravado and how being cocky often gets riders into real trouble real fast.

“We had a whole string of colts tied to a fence one time and this lady wanted to get her colt so she just walked right up from behind these young horses and went right in between them to get her colt. I watched this happen and then I asked this lady, ’weren’t you scared just then when you did that?‘, She said she wasn’t scared at all. Well, I told her, I sure was!”

A courageous rider is a person who is well aware of the risks they are taking, a jockey guiding his mount into the starting gate for example; it’s the jockey’s own supreme self confidence in his ability that overcomes any fear he is experiencing.

Fear stems from negative feelings; things we know can actually happen based on past experience, while anxiety sprouts from imaginatively speculating on what could or might happen.

If you’ve recently had a riding accident, then experiencing fearful thoughts about that accident happening again is a normal response. If you’ve never had anything bad happen while riding but you still feel nervous every time you get your horse out; that’s anxiety.

The psychological recovery from an accident can often take much longer than the physical recovery. Much of this depends on how confident the rider was before the accident as well as their understanding and acceptance of how and why the wreck occurred.

Back when I was competing regularly, my confidence level was at an all time high. One day when I was exercising my horse in a field, galloping long straight lines for conditioning, he stumbled and fell. My dogs had been nearby and the horse had bucked a bit just before losing his balance.

I feel it was because he thought the dogs were too close (my fault) neither one of us were really paying attention like we should have been (my fault again) it was classic pilot error. The fall sent us both head over heels at near top speed. It happened so fast that I don’t have any memory of actually going down or hitting the ground.

I remember coming to, I was flat on my back about twenty feet away, struggling to get air into my lungs. I looked over to see my horse was also struggling to get to his feet. His saddle was a mess, embedded with chunks of dirt and grass. Our eyes met and for a split second it was as if we knew exactly what the other was thinking, “what the heck happened!”.

I checked my horse over and he seemed fine so I mounted back up and we slowly walked back to the barn. The next day I felt like I had been in a pretty rough car crash. I took my horse out on the lead, watching carefully for any signs of injury; he looked fine. We did some light work for the next few days and after a couple of weeks we were back into our normal routine.

I must admit that ever since that wreck, whenever I have a horse going at the gallop, (not that often these days!) the thought of us going down nose first seems to always flash by. I let the thought in and then let it go, it’s a reminder to concentrate on being the best pilot I can possibly be.

There is a clear correlation between skill, experience and the level of fear a rider might be having. In my current situation, my own self confidence level has clearly dropped. It’s the combination of moving to a new country, switching to a new discipline and buying a new horse that has led to my own increased fear and anxiety.

It’s been fascinating and fun but also unnerving. Everyone around me is speaking languages other than English, my dressage lessons have been a personal wake-up call to how much my riding has actually degraded over the years and instead of the pokey, quiet, Quarter Horse I had been trail riding on saturday afternoons, I now have a tall, athletic, German Warm Blood that is used to a focused, disciplined rider. These are not small bites!

There is a ton of information about fear and anxiety disorders on the web but surprisingly little about common, garden variety fear and anxiety. If you’re terrified of horses in general, you probably suffer from a true phobia and professional help is in order to overcome it. If you feel a bit nervous or have a knot in your gut whenever you get your horse out, chances are you’re experiencing simple, common anxiety.

I did find some helpful information from professional anxiety coach Dr. Dave Carbonell. He talks about how our own anxiety often ‘tricks’ us into using methods that actually make the problem worse rather than better.

“This is the most natural thing in the world. People think of chronic anxiety as something that invades their lives, something they have to resist and oppose. However, the worst problems come from our efforts to resist and remove anxiety, rather than from the anxiety itself. People don’t get fooled by this trick entirely on their own. All too often, well meaning friends, doctors, and therapists get fooled by it as well, and unwittingly suggest methods to their patients which make the situation worse. For instance, there’s a well publicized technique called “thought stopping”, in which you snap a rubber band against your wrist when you have an anxious thought, and say “stop!” to yourself. It’s hard for me to understand why professionals still suggest this idea, because it’s very unlikely to be of any help. The more you tell yourself not to think something, the more you’ll think about it."

Taking a Step Back

Taking a step back, in my case, has been a great help. Without realizing it, I had been putting a lot of pressure on myself, trying to somehow ‘catch up’ to the rider I was ten years ago and trying to make it happen in way too short of a time-frame. 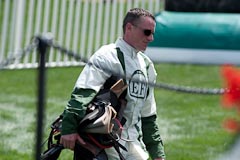 Realizing that the pressure was coming from within me and not from people around me was a big first step. My mare Grace is a recent retiree of Grand Prix level show jumping. For her, at age twelve, stepping back from that level of competition has been a healthy, positive change. In a way, we are both starting over, beginning a new life one step at a time.

In dealing with my own anxiety, I find that doing the things I was the most comfortable with back home; ground work, basic arena exercises and riding out on trails, is really helping to bring my confidence level back up. It’s also helping to clear my mind of negative thoughts and instead focus on what’s really important; how much fun I am having.