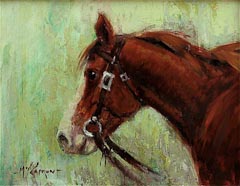 It was late one evening on the fall works. We were running behind schedule so our commute home was a long and late one. This was pre-gooseneck days so the options were slim; ride your pony home in the dark, walk and lead him, or spend the night there alone and try to catch up the next day somewhere on the drive. Easy choice I would say. We were going to ride home.

It was a cloudy moonless night and the sky afforded very little light. Even the horizon was hidden most of the time. Several of the men had been raised on this ranch and it was a good thing. I was lost most of the time and sure wasn’t about to get very far behind. Single file was in order and I sure did do a lot of listening and feeling.

It was hard to ride at first with no sight. Seeing your hand in front of your face was impossible. I was impressed with how well my horse was negotiating the terrain as we were cutting across country. This is when the conversation came up on how well ponies see at night.

I was trying to figure out how the old time cowboys of the trail driving days managed to survive a ride with a stampede on a night like this. I realize that cowboys have always spurred into a run in order to get a cow held up and did it under any circumstances. I do believe in the talents of horses that have saved many a cowboy’s life. The thought of making a run on a bunch of stampeding cattle on a night like this made my skin shiver.

One member of the crew allowed that horses could see in the dark as well as they could in the day. I had to think about that a minute. I couldn’t prove him wrong even though it didn’t seem possible. This pony I was riding in the pitch black of night however, sure was impressing me. He hadn’t made a stumble and felt like he knew exactly what he was doing and where he was going.

I was sure gaining confidence in his ability to see in the dark and enjoying the thrill of riding like I was blindfolded. It gave me a new sense of feeling for balance. I had to feel my way to ride instead of anticipating the next move. It was necessary to feel first and then react.

We had been riding for what seemed like a long time. I knew we were getting close to the house but couldn’t see lights anywhere as the house was in a canyon and the closest neighbor was out of sight. The conversation had trickled down to a stop, everyone was tired of riding in the dark and ready to be home.

The ponies were feeling home close by too. We had trotted when we could and walked when it seemed necessary. I was sure glad that nobody tried to do any loping, although I am sure I would have loped right along with everyone else as I sure wasn’t going to be left behind. We had slowed to a walk after a good bit of trotting because we were looking for the horse trap fence and a gate.

It was a good thing we had slowed to a walk. Andy’s horse walked right up into the middle of the horse trap fence and sure was tangled for a minute. I never heard such a commotion! Andy wasn’t sparring any language to go along with the action either. The way it sounded, he wasn’t sure which way to go.

I was headed the other direction as I didn’t see how I could help out in any way. I didn’t think Andy was ever going to get his horse out of that wire. It sure caused a lot of sparks to fly with the wire stretching and the staples snapping and Andy hollering at his horse. It was all sure impressive to me but then it got quiet as quick as it had got started. In the still everyone was motionless and waiting to see what was next.

Andy got gathered up and checked out his situation. All seemed remarkably well considering. You could hear him take a deep breath and then he said, “So much for that theory as far as a horse being able to see in the dark!”

Very few times does a horse get his name changed but Andy changed this one’s name to Ciegos (blind) and it stuck!